(8/2/13: Special report by Tim Potter for Chris who's just fine and sends his apologies for not blogging more regularly; he's just VERY TIRED as you can imagine!)

Chris and his fellow extreme PAC cyclo tourists roared through Michigan earlier this week and I had the pleasure of meeting them in Coldwater which was their day 25 stop.  My best friend's parents have a nice place just outside of town there so I figured he might like to have a break from the hotel/motel routine, so after dinner at a country steak-house with the motto "Where size does matter" (he REALLY needed the extra large portion!  His 2 pork chops were an inch thick!) we crashed at the Wilkinson's Orchard Beach Farm on Marble Lake.

Day 25 started in Hudsonville, MI for them which was day 2 in Michigan (day 1 started in Ludington further north on the Lk. Michigan shore which is where the ferry from Wisconsin landed them).  They battled some of the worst rain they've had the whole tour in our fair state (sorry guys!) and were drenched when I met up with them at the Super 8 Motel in Coldwater.

Day 26 was a lovely morning which started at 5 am for us in order to get Chris to the motel in time for him to do his morning routine.  I was able to check out the PAC Tour caravan, spare bikes, cool trailer decorations, etc. and then finally met the owners/ operators, Susan Notorangelo and Lon Haldeman after breakfast finally was underway and they could breathe a bit.  Lon and Susan are both multi RAAM winners both in the solo and tandem categories, so Lon is an excellent guide for doing such a high-speed cross-country tour (he's done it in less than a 1/3 the time that this tour complete it in!).


We rolled off for
day 26 at 7 am (approx) with the eager ones leaving much earlier to get a head start on the 130 mi. planned for the day.  I brought my "new" 1973 road bike, a Schwinn Paramount, which I'd equipped with new fat tires (700 x 32 mm).  It was a very comfy ride for me.  The extreme PAC cyclists were mostly running the skinny 700 x 23 or 25 mm tires at very high pressures which surprised me given the long distances on rough country roads they travel.  Anyway, I ended up riding about 20 mi. of the day's route and greatly enjoyed meeting and chatting with a number of Chris' fellow travelers from around the country.

So, Chris is wending his way into W. Virginia tomorrow and has this short report after today's ride:
"Had dinner downtown. Back at the hotel. Going to soak my butt and head to bed. Tomorrow we enter W. Virginia. Two hardest days will be Sunday and Monday."

If you live anywhere near their scheduled route (see their itinerary here) please try meet up with him and cheer him on.  Riding along with him and the others is encouraged!  He'll greatly enjoy seeing you and you'll be greatly inspired! 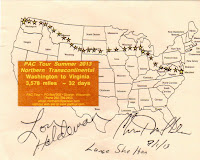 Here's a postcard from the tour I got from Chris as a memento with his signature, his friend and room-mate Lance's (the other Lance from Texas) and Lon Haldeman's.

What a huge inspiration it was to meet up with Chris and this group!  The ages of the participants is on average is well above 50, retirees presumably, but there was at least one teenager riding solo with his father along with four tandems including one with a special-needs stoker who really seemed to brighten everyone's morning.

More of my photos can be seen here.