Today’s my mom’s birthday. She turns 80. Only she doesn’t know it. She is severely hampered by Alzheimer’s. While I was pedaling from Powell to Sheridan, WY, she had a seizure.
I’ve written about my mom before in The Phast Times News. As Patricia Phelan, she’s the one who, while serving up spaghetti for a carbo load dinner the night before The Boston Marathon, famously asked, “Why are you running? You know you can’t win.”
It was a laughable memory that became a teaching moment, and later, family lore. After that, I referenced her again a couple of months later in a column entitled, “THE LOOK.” Below is an excerpt.

The look on my mom’s face when she first heard Jimi Hendrix’ live version of the “Star Spangled Banner” from the Woodstock concert, set the template for years to come during my athletic career. I just didn’t know it at the time.


This was the pinnacle of the late 60’s; music and culture, with a political statement. The sounds, style, and guitar playing of Hendrix was never seen before. (Though left handed, Hendrix played a right handed guitar upside down, and restrung backwards. Imagine driving your car from the backseat, facing out the back window, during rush hour.)


It was during the second listen that I called my mom to join my dad and me. Once in the living room, there she stood as a statue with her hands on her hips, staring.


No doubt she was hoping for Glen Miller or Patsy Cline when the first obscene and stabbing notes of Hendrix’s high pitched squeal and feedback pierced the speakers.


No doubt she was insulted and thought there should be a constitutional amendment against such music.


With her son leading the charge, no doubt my mom envisioned the end of western civilization, when Hendrix intoned jets dive bombing and strafing the jungles of Vietnam with napalm, during an otherwise patriotic instrumental solo tribute.


At the end of the three minute and 46 second recording, before Hendrix launched into the first distinctive drug drenched chords of “Purple Haze,” I couldn’t wait to ask my mom what she thought, what was her opinion? I was thrilled, and couldn’t imagine how anyone else couldn’t be, too. I expected words of affirmation of what I heard and felt, of a fresh sound full of possibility and giving new perspective.


My parents only saw me compete in running twice while I was growing up. They attended two of my high school meets. Mom had the same look on her face, then.


The next time she saw me run was 15 years later doing my second marathon, running 2:35 at Boston, and barely missing the Top 100. She met me at the finish line. She didn’t have a clue why anyone would run 26.2 miles. While mom cast “The Look” again, secretly I think she hoped I was done with this silly sport. “What was the point?” she seemed to silently ask.


A few years later, my folks stood at the line of my first Ironman triathlon. If they thought running 26.2 miles was crazy, this really blew them away. Again, what was the point? Slow suicide? And again, there was “The Look,” even though I finished 21st overall with a 10:00:52. Maybe it was of concern. “Why, son, are you beating the tar out of yourself? Why don’t you just stop?” 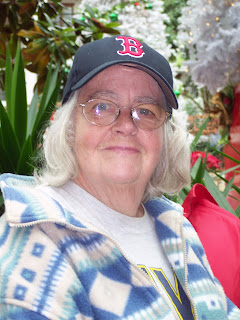 Is this what’s going to happen to even us who exercise several hours a day, who swim, bike, run, do weights, and eat kale? What has age in store for me? The ugly ravages and debris of a brain and body that has no function, left behind by this unremorseful and undiscriminating disease, when I have finally gained the pinnacle of experience to live a full life?
What do you do when the road hits you with a curve? When life gives you more than you can run with? Knowing we are all different, it is never easy to determine what the right answer to every question should be.  Mom has the time to ponder the secrets of the sea, and even the answers, but has no way to communicate what she finds.


A missing soul on an empty face.


Where are you today? Where did you go?


What have you got to say? Tell us what you know.


Listening to the sighs, another slice a la mode


I feel I can’t breathe, but the window’s down


I feel I can’t leave, though I can move around

Blue, blue skies, she flies away


Without goodbyes; visit another day


In her world without me she’s moving on

Blue, blue skies, I was thinking too much


A hollow voice cries I wanted her touch


Promised never to leave me.


But you’ve got to go anyway


There is no way of stopping you.


But I hope to see you again, someday,…someway.


January in her eyes and a handful of leaves


Everyone’s got to go, what’s it all mean?


This I know, it’s the time in between.

Blue, blue eyes, looking into nothing


Listening to our sighs, is there something…we can do or sing?