The Ride Of Silence 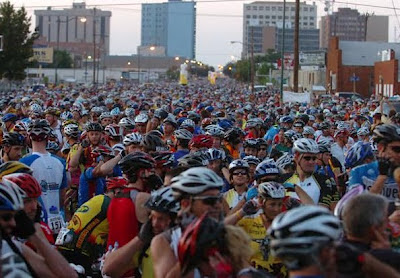 Wichita Falls, Texas, start of the Hotter 'n Hell Hundred; cyclists just waiting for a bus to cut them off.

I just watched the video of bus purposely driving and swerving into a cyclist on a busy city street. The cyclists received a fractured leg and wrist. The bus driver, 17 months in jail.

To find these two modes of transportation pitted against each other is a David and Goliath story.

The venerable and defenseless, self powered cyclist who can’t help but ride beneath the 30 MPH speed limit, vs. the metal behemoth that belches diesel with abandon, stops in No Parking Zones, runs red lights, speeds through city streets with the power of a weighted right foot on the gas pedal, and turns recklessly in and out traffic.

Is this even a contest?

With its protruding mirrors, the dinosaur of the street has lances to strike unsuspecting pedestrians as well as cyclists and other cars. City buses appear to get a free pass from state inspection agencies.

Yeah, yeah. I know their big and bulky. There’s a solution for that. Take them off city streets, make the buses smaller – thinner and shorter length, or aim for higher driving skills from the operators.

Shame on buses. Shame on our society for their proliferation.

It’s disturbing to read the mindset of some who commented and condoned that this kind of behavior is OK, to nearly kill another person, despite their defenselessness, or the out sized battle between a bus and a bicyclist. It’s abhorrent.

And, yet, it exists.

I’ve read comments where motorists, right here in Dallas, ranted with such ferocity as to almost set my computer creen on fire. Pure and raw, hatred for people on two wheels spoken from the superiority of being safely encased on four wheels, poured out on to people’s keyboards. It’s shocking this atmosphere even exists, let alone tolerated, at a time when every soccer mom wants to hang the school yard bully from their own SUV rear view (make-up?) mirror. How can this be?

Oh, don’t pretend it only happens “in that other town,” or “in another state,” and now, “in THAT country.” No, not any more, ladies and gentlemen. Not any more. The problem is so perverse and pervasive as to cause grassroots organizing. One is the annual Ride Of Silence that was begun right here in Dallas, at White Rock Lake.

One of the things that was learned via The Ride Of Silence was how problem motorists aren’t just in Dallas, or in Texas, or in the good ol’ US of A. Nope. Put on your helmets because they’re everywhere. Even in that land of eternal sunshine, blond hair, and youth, California. “We have met the enemy. And he is us.”

Through the Ride Of Silence, we have learned that every state, E V E R Y state, has tragic cases (multiple) of a motorist flying into a rage and slamming into a cyclist, some times many cyclists. (The free and slow Ride Of Silence will take place on Wednesday, May 16, 7 PM, world wide. www.rideofsilence.org)

And as we can all see, these not-so-rare cases haven’t chased off the two-wheeled population. In fact, just the opposite. Cycling has grown by every category. Bikes sold, organized rides, stores, training programs, and number of cyclists. Been to White Rock Lake lately, on a Saturday morning in August? You’d think we lived in Europe.

Face it! They’re every where! And they’re here to stay. Bicycles are not suddenly going to be outlawed or disappear into garages like prohibition stills. They’re not.

The best thing a motorist can do is get with the program, realize “they’re out there,” and get used to the cyclists riding on the road where they are legally supposed to be. Additionally, motorists have a legal obligation to share the road with a cyclist and others. Have you noticed those signs around town, “Share The Road?” Didn’t think so.

Really, bicycles are the best thing for any neighborhood or street. Studies show that where there are cyclists there are fewer accidents, less crime, and a healthier population. So why not embrace cyclists? Why not?

They lessen congestion, aid toward cleaner air, help to keep motorists at or below the speed limit, and encourage other users of the roads and sidewalks such as walkers and runners, in particular.

There is no reason, NO REASON, to point a bus or any motor vehicle at a cyclist with the intent to scare, injure, or kill. No reason. I’ve been hit a few times (broadsided, head on, and from behind), had glass bottles thrown at me from a car traveling 40 MPH, and a metal rod pointed at me with the intent of taking out my eye, all from a motor vehicles right here in Dallas.

Why? Because I’m going 20 MPH? Really? That’s your reason? Really? Turn on “American Idol” if you want to get angry.

I’m thinking of Fred Mercury’s yell from vinyl history. “Get on your bikes, and ride!”

You are inspiring many people through this ride, while getting the message out to others who probably were hearing this for the first time. I'm happy to hear you’re doing this.

This is an important date for your community. Cherish it. Through its people, your town has taken a giant step in the right direction toward cyclist safety.

As you probably do, we see this as a very significant event, if only because it is held world wide on the same day, at the same time. But more so, because it remembers those lost doing what is a legal right.

Again, thank you for being part of this world wide event. It is appreciated. Thank you for your passion. I look forward to partnering with each of you as we continue the tradition of excellence that distinguishes The Ride Of Silence, and as together, we envision the path for the future. Our purpose is noble, our cause is just. The Ride of Silence is an event worth protecting.

Through the web site, be sure to let us know how it goes, especially how many people attend. (Send reports to: http://www.rideofsilence.org/reports/)

Chris Phelan, Founder
The Ride Of Silence
www.rideofsilence.org
Follow & interact with others on the National Ride of Silence page on
Facebook: http://www.facebook.com/rideofsilence
http://www.facebook.com/home.php?#!/pages/Ride-of-Silence/33924790161?ref=ts
http://www.youtube.com/watch?v=ttNHKTRMtK4
http://www.youtube.com/watch?v=TNWj-OU5kBc
On Twitter: @RideofSilence
Wednesday, May 16, 2012, 7 PM
One day. One time. One world, world wide.
Let the silence roar.