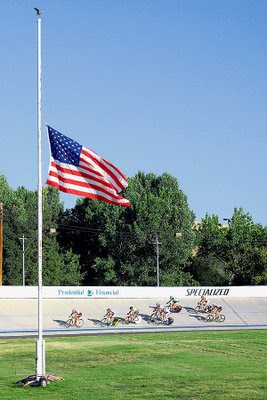 This is an article ran in the Michigan State University newspaper.

Bicyclists need to stay on sidewalk by Zack Colman

Black 2001 Saturn SC2. That’s the car I drive — and if you’re a bicyclist on the road but not in a bike path and you see my car, I hope you’re wearing a helmet, because I might run you over.
Maybe not intentionally.
But you see, with all these things I can do in my car nowadays, such as choose a different song on my iPod, send a text message while driving or fall asleep at the wheel because I had to wake up for a worthless 8 a.m. biology lab, I might not notice you.
And, considering you are where you should not be, I might hit you.
The simple fact of the matter is, MSU has so kindly provided sidewalks for people on foot and Rollerblades, and MSU’s ordinance should be revised to require bicyclists be there too. The university has outlined bike paths on certain roads, but bicyclists can’t just create imaginary bike paths like they do.
I cannot drive my car on the sidewalk, so why must you ride your bicycle where I drive?
Many of my friends ride bicycles on campus, so I’m not trying to berate a whole demographic of students. I appreciate bicyclists who advocate environmentalism, since they are making up for the damage I do with my car.
I respect bicyclists who use bicycles as a form of exercise, since people certainly can never get enough fitness in their everyday routines.
But for as much as I respect and appreciate bicyclists, I will not hesitate to honk at them when they are interfering with the roads.
My concern is not merely about inconvenience.
Bicyclists on the road are a driving hazard to people in automobiles, since many bicyclists make turns without using hand signals and ride too close to other vehicles when there is no designated bike path.
For example, I was driving to work Tuesday when a bicyclist pulled up in front of my car in the right lane on Farm Lane going northbound where it intersects with Shaw Lane. There is no bike path at this portion of the road, and I needed to be in the right lane to avoid the left turn only lane, but the bicyclist was in the way.
Instead, I had to speed ahead and veer away from the fast-approaching rear end of the car in front of me, just barely making it into the right lane.
Some will say I could be more patient on the road.
But roads are for cars, not bicyclists. The bicyclist should not have been in the car lane.
It’s possible some bicyclists are trying to live out their dreams of being Lance Armstrong, and the smooth terrain offered by the roads where big, people-killing cars are designed to travel on are more desirable than the sidewalk pavement.
I get it, bicyclists — you’re in the Tour de France. Well, in your head at least.
But in reality, my gas-guzzling, carbon footprint-leaving car is trying to get around you, the bicyclist. And you, the bicyclist, prefer to coast, not along the side of the lane but in the exact middle.
Maybe in your head you are actually driving a car. Maybe that’s why you believe you should be behind a pickup truck and in front of 15 other cars trying to pass you.
And maybe you are Armstrong, so talented and in shape and able to pedal so, so fast. But Armstrong’s average speed in the 2001 Tour de France was 24.9 mph, which is 0.1 mph less than most of the speed limits on and around campus.
Plus, I’ve had difficulty finding students who actually obey the speed limit anyway.
It’s common for motorists to drive at least 5 mph above the speed limit, which makes your task to out-pedal Lance Armstrong all the more daunting. And considering you’re not actually Armstrong (even if you do wear a skintight yellow bicycle uniform), you likely are not going 24.9 mph.
And, oh yeah, Armstrong is competing when he is bicycling — your leisurely ride through campus might not even register on a police radar.
But, hey, snap out of it. You’re not Lance Armstrong.
And those are the headlights of my black 2001 Saturn SC2 bearing down on you.
Zack Colman is the State News opinion writer. Reach him at colmanz1@msu.edu.
Published on Wednesday, April 8, 2009

I am continually astounded at the ignorance that pervades my species. I am not sure if shake my head at embarrassment for this man, or the horror he commits.

"Someday, I visualize a world when motorists will know beyond a doubt that they will encounter two-wheeled people. When cyclists will ride in safety, at any time of day, and not worry for their lives, but rather in pursuit of their own well being, and their own dream, uncompromised, and untarnished. I have a dream!"
Chris Phelan, with acknowledgements to Martin Lurther King’s "I have a dream."
posted by Chris Phelan  # 8:38 PM